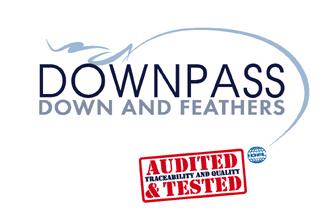 DOWNPASS 2016 is based on the standards specified in the European Convention for the Protection of Animals kept for Farming Purposes concerning correct animal husbandry and the various quality requirements for feathers and down. Scientists, vets and animal welfare organisations played a significant role in the further development of the Downpass 2016. In the meantime, the DOWNPASS 2016 has been further developed to a zero tolerance standard. All information can be found at www.downpass.com

The aim is to implement a globally valid and recognised system to ensure that worldwide demand, which reveals rapid expansion in Asian emerging markets, for example, can be met from ethically sound sources. The feather and down industry acts in exactly the same way as the global clothing industry: goods are procured from a wide range of countries. In contrast to isolated solutions on a national or western level, the Downpass aims to offer a solution that suits procurement behaviour and consumer habits all over the world.

With the DOWNPASS 2016, both finished products (e.g. down jackets and sleeping bags) and down and feather transport containers (e.g. packed in balls or sacks) can be traced all the way back through the chain of custody.

The Downpass 2016 unites ethical and quality inspection criteria, whilst documenting the origin (traceability) of feathers and down from waterfowl (ducks and geese) that are used as filling material for clothing, outdoor equipment and bedding. Traceability audits and quality inspections are carried out by recognised, neutral third parties.

Assurance must be given that products only contain down and feathers that were not plucked from live animals.

In terms of quality, products that carry the Downpass 2016 seal must meet the requirements detailed on the label. Inspections are carried out through mystery shopping programmes in stores and subsequent testing of the filling material composition in accredited test laboratories.